A LOCAL author’s new book on RAF Biggin Hill is the result of dedicated research conducted over the past five years. 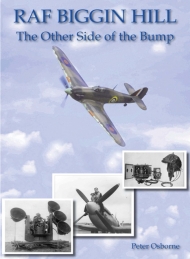 Peter Osborne, pictured, has released ‘RAF Biggin Hill – The Other Side of the Bump’ which runs to 352 pages and contains more than 200 previously unpublished or rarely seen pictures and illustrations.

Peter said: “Biggin Hill and the Battle of Britain is the link that everyone makes, and quite rightly so but, beginning in the First World War and running right through to World War Two, is a fascinating story of research and experimentation at Biggin Hill.

“Without that work by the all but forgotten engineers and scientists on the War Office secret site in South Camp, the result of the Battle of Britain might have been quite different.”

He added: “Radio communications, interception tactics and the detection of enemy raiders, especially at night, owed everything to the Air Defence Experimental Establishment at Biggin Hill.”

The book is available in hardback and paperback and can be bought locally at The Spitfire Café or Occasions in Biggin Hill. Alternatively, combine a visit to St George’s RAF Memorial Chapel on Main Road, where the book is on sale with all royalties donated to support the Chapel.

Peter will be at the Chapel on Saturday, December 12 to sign copies.

Often known as the ‘Most Famous Fighter Station’ in the World’, Biggin Hill has a rich and virtually unknown history behind the scenes. With the Wireless Testing Park established at Biggin Hill in 1917 the RAF Wireless Experimental Establishment was consolidated there on the formation of the RAF in 1918. Developmental work continued on wireless telephony and Radio Direction Finding (RDF) – resulting, among many other things, in the first air to air telephony and a radio guided flight to Paris above cloud cover. With the first hint of RADAR not appearing until 1935, the acoustic detection of aircraft was the only possible means by which the new threat of the aircraft could be met. The ‘Biggin Hill System’ of acoustic discs was expanded to a giant network on the south coast and with it developed a command and control system which, some years later, would form the core of Dowding’s defence. In 1936 the ‘Biggin Hill Experiments’ created the model by which the RAF so effectively intercepted the Luftwaffe in 1940. Whilst at the Air Defence Experimental Establishment (ADEE) an accurate means by which searchlights and anti-aircraft guns could be brought to bear on enemy aircraft, particularly during the Blitz, came to fruition. More than just a Fighter Station, for the first time, the full extent of RAF Biggin Hill’s contribution to Allied campaigns can finally be revealed.
ALSO AVAILABLE IN HARDBACK £19.99 AVAILABLE TO ORDER NOW